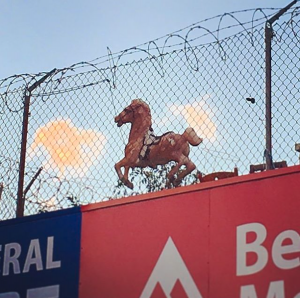 I woke up yesterday morning to an email from psychologist and mindfulness teacher Rick Hanson. Rather than his usual kind, neuroscience-informed tip-of-the-day for wellbeing, this is a strong-willed invocation to know the facts and your values as they pertain to the current political situation.

I’m proud of my colleague for speaking out in this way. This message, coming from a meditation teacher, speaks to an important point about meditation, and spirituality in general: A holistic spirituality is political. It is ethical. It holds people to their word. It acknowledges bias, and class, and caste and color and the ways our world is out of balance.

One of the central aspects of mindfulness is the concept of non-resistance. We often talk about not resisting pain, “turning toward” emotional discomfort, “letting go.” Another word for this is “equanimity.” While this is a tremendously valuable teaching, it can often get us stuck on notions of calm, passivity, even indifference as the goal of meditation. This represents an incomplete understanding.

There is another aspect of non-resistance which often gets ignored. That is: not resisting the natural flow of the mind to create concepts, ideas, beliefs, associations. Not resisting the arising of the sense of self.

This may sound esoteric, so let’s make it practical: when something is happening in your world that gets you upset, and there is a movement from deep inside you to do something about it, this is an opportunity for non-resistance. Within the framework of kindness, what would it mean to surrender to that movement into action? Into a cause? When the part of you arises that is afraid, outraged, protective of others—what does it look like not to resist the expression of that part?

When you feel fundamentally moved to resist some aspect of the external world—again, within a framework of kindness, compassion, ethics—what could it mean not to resist the internal movement to do that? This is to allow engagement in the world, engagement which is a fundamental difference between a human being and a rock.

Essentially, we are making a very important distinction between internal experience (the flow of senses, emotions, thoughts, beliefs, ideas…)—with which we practice non-resistance—and external experience (our exchanges with others, seeking support, taking care, causes, community, the state of the world)—with which we engage. I’ll say one more time, with a simple lens of ethics (is it kind? is it compassionate?) we connect, relate, speak out, donate, educate, volunteer, march, protest, and resist wherever in the world we are aunthentically moved to do so. This is by no means out of alignment with spirituality. In fact, this is a fully integrated spirituality. One that is political. One that acknowledges injustice. And this spirituality is bolstered—even made possible—by the internal non-resistance which allows us to flow effortlessly into action.